This is the third post in a series about my 2013 trip to Ibiza for the closing parties. Part of the free plane tickets were funded by the 40,000 point sign up bonus of the Chase Sapphire Preferred card. I redeemed 135,000 points for First Class flights from Miami to Ibiza on Lufthansa.

As I left the lounge I was able to get a glimpse of the Airbus A-330-300 I would be flying on from New York to Munich. 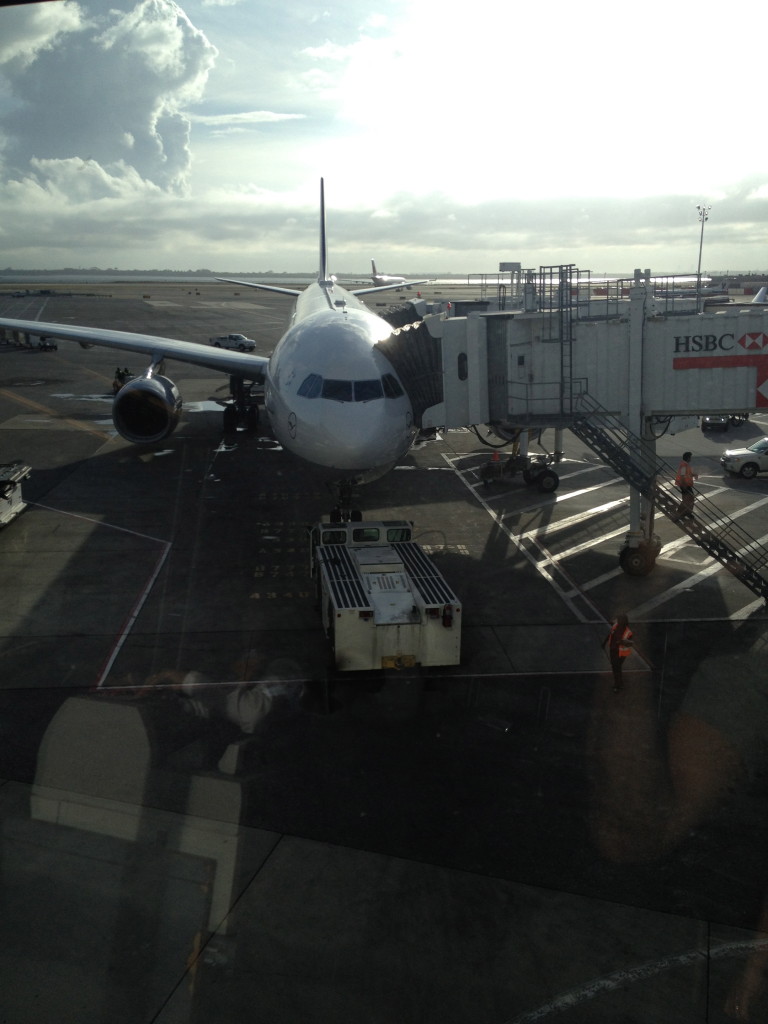 I had actually spent as much time in the lounge as possible so had missed the premium cabin preboarding call but as I went down the jetway, I realized there was a separate entrance at the front of the plane for First Class passengers so I wouldn’t have to wait in line after all. 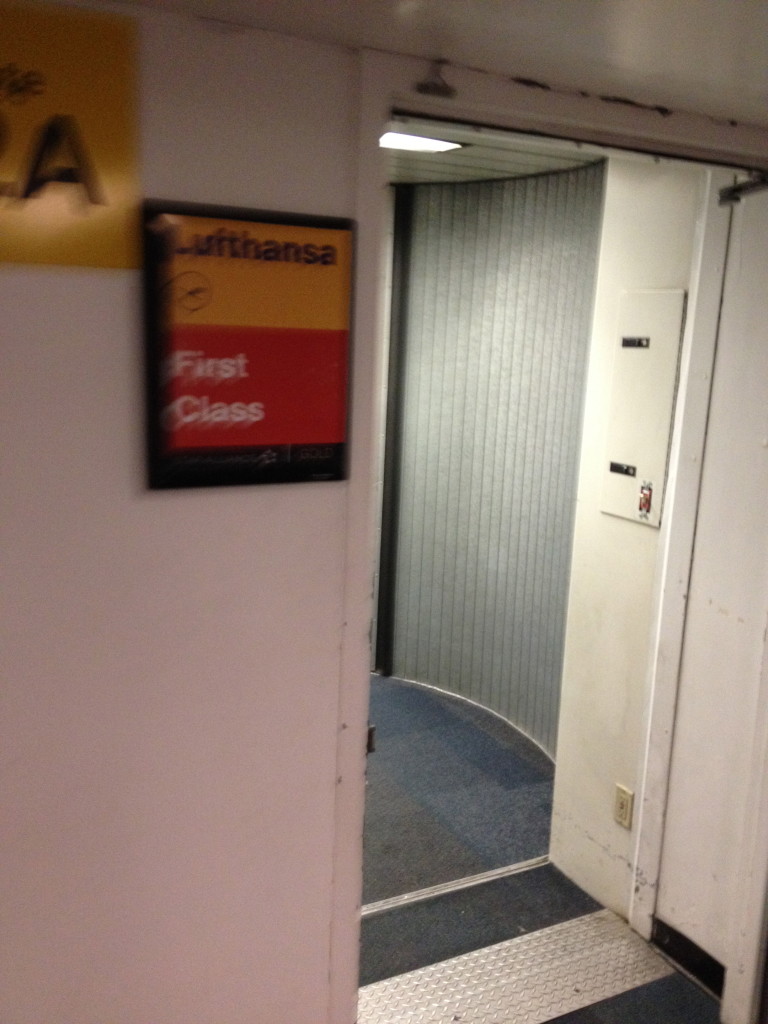 This dedicated entrance whisked me right into the First Class cabin where the flight attendants were waiting for my arrival. I had arranged seat 1K and it looked like it would be comfortable for the 7 hour flight to Munich! 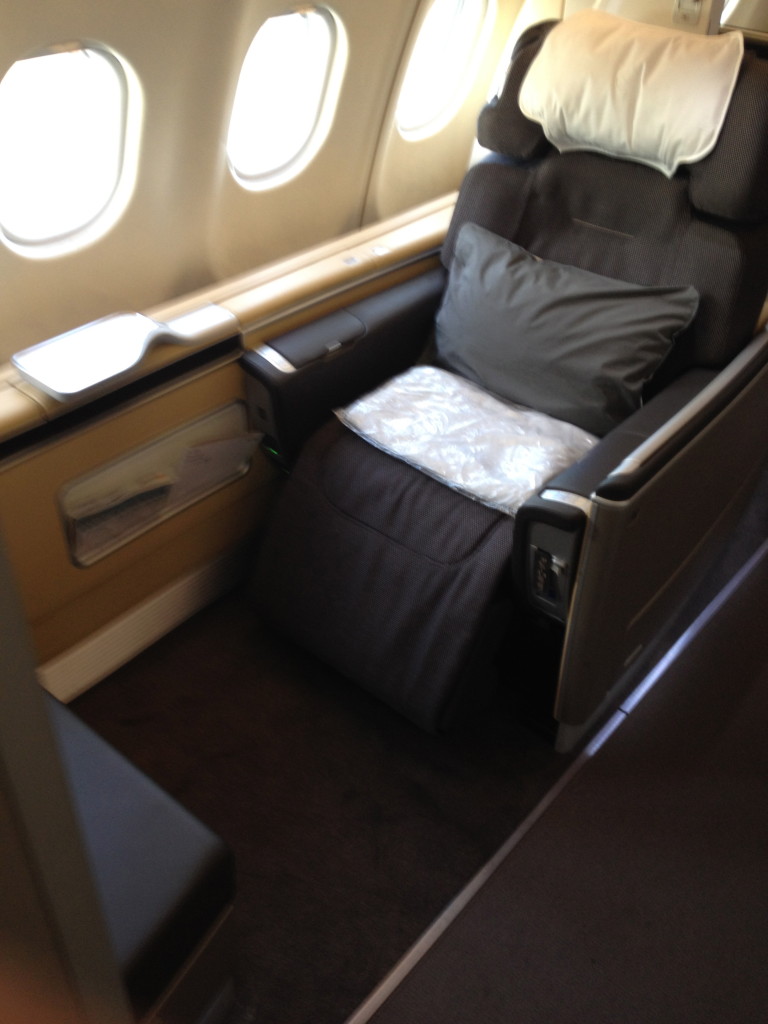 They offered me a snack and a drink so I got one of their selection of German beers.  And what a beer it was! No little cans here! 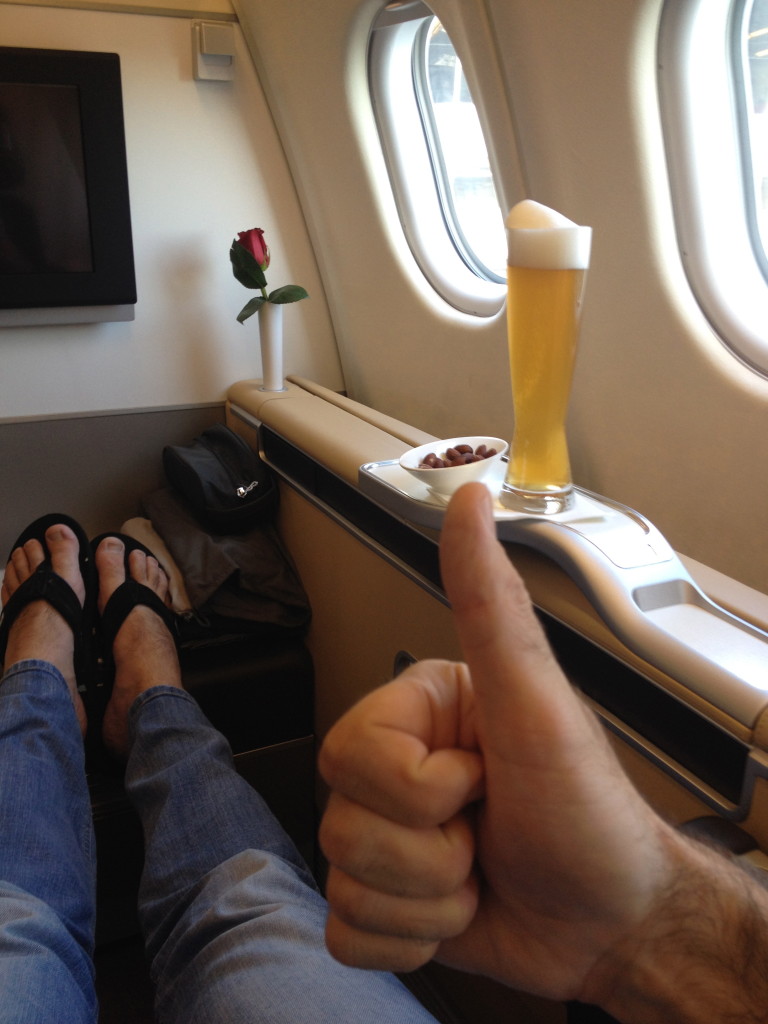 As you can see, even though I am 6’2″ there was plenty of room for me to stretch out my legs. There was also a giant video screen(I think it was 17″) for watching TV shows and movies on demand or listening to music. 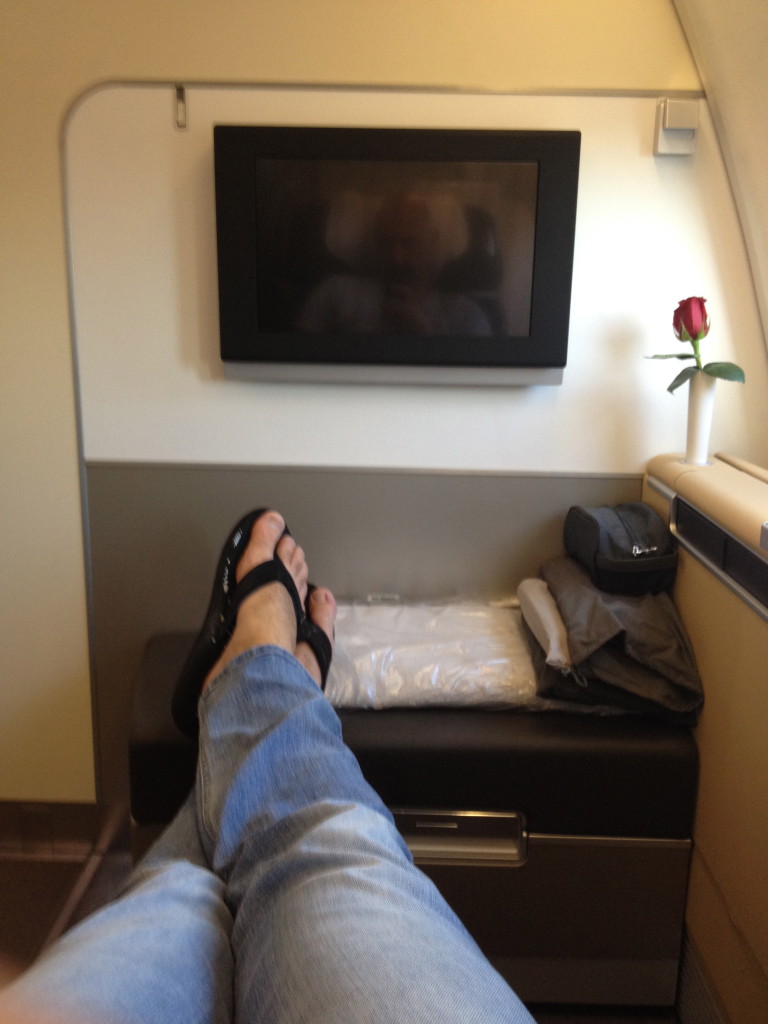 I particularly liked that since Lufthansa is a German airline, they used a turntable for the “Audio” icon in the AVOD system. 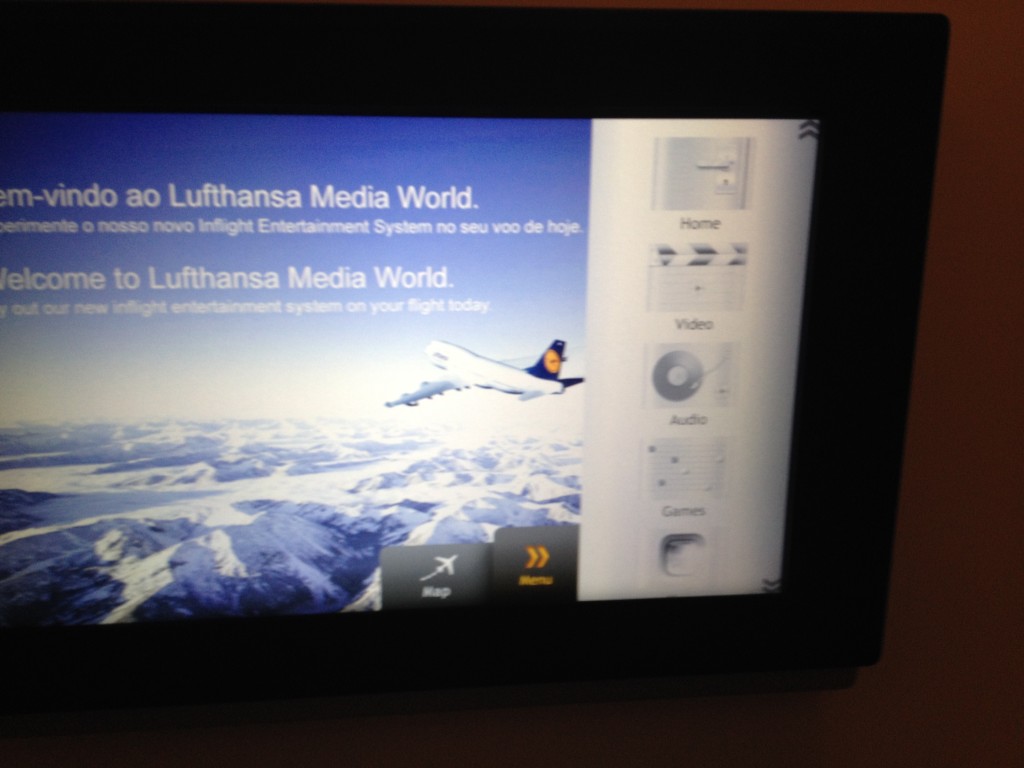 They provided an amenity kit, a pair of pajamas and some slippers. 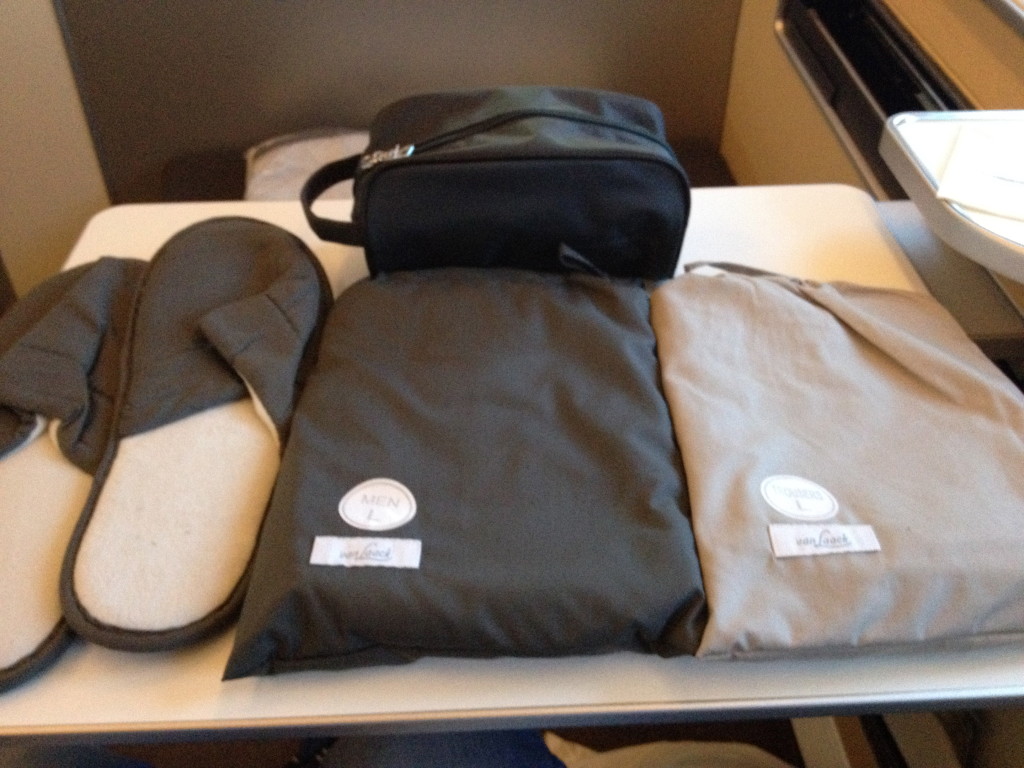 The amenity kit included toothbrush and toothpaste, an eyemask, some socks, some ear covers for the headphones and some facecream to help with the dry air of the cabin. 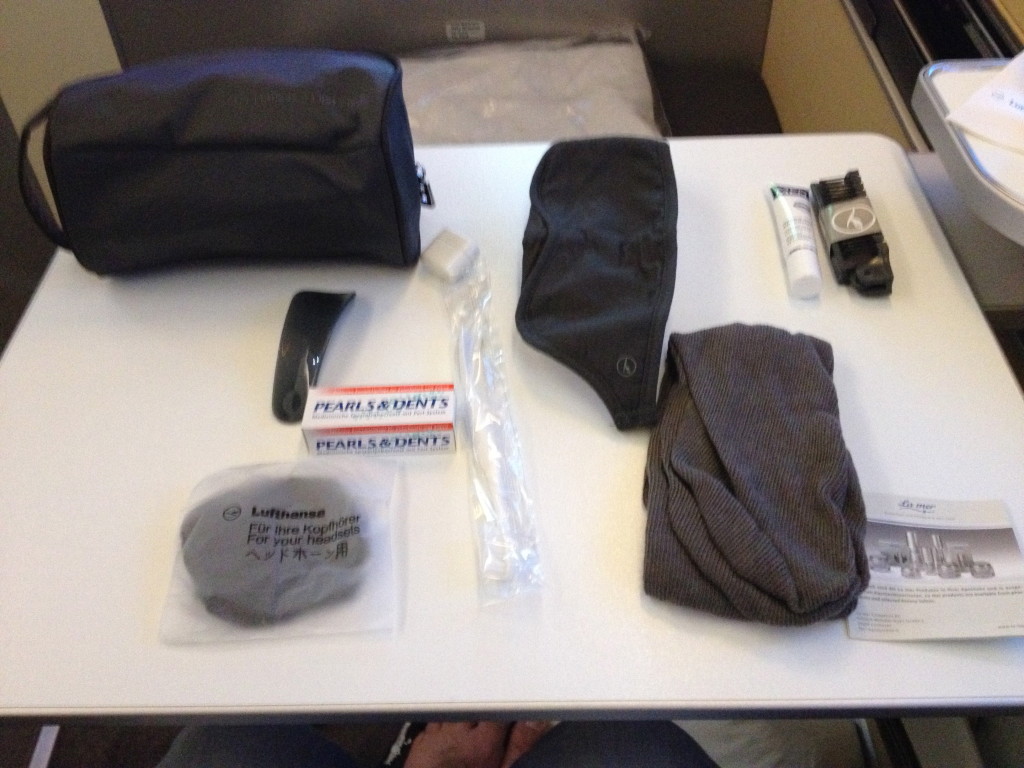 Shortly after take off they brought me the menu and you could tell right away this was first class due to the caviar service and other choices. 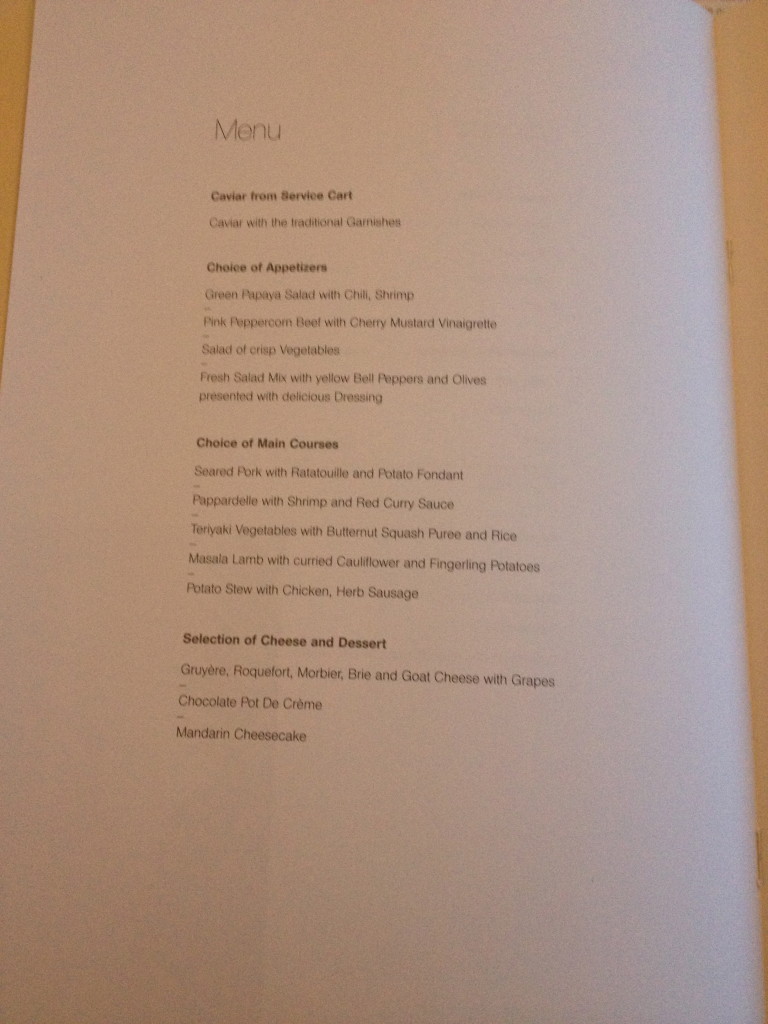 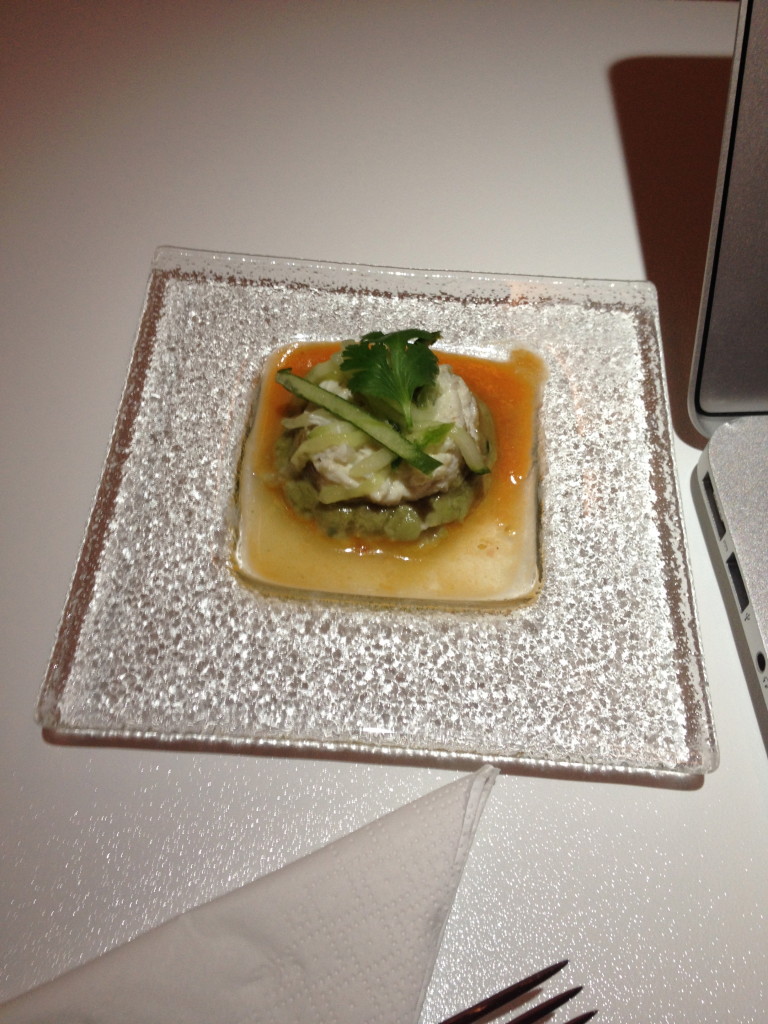 Then came the caviar service with vodka, the Peppercorn Beef, and the green papaya salad.  Since First Class wasn’t full they gave me an assortment of appetizers to choose from! 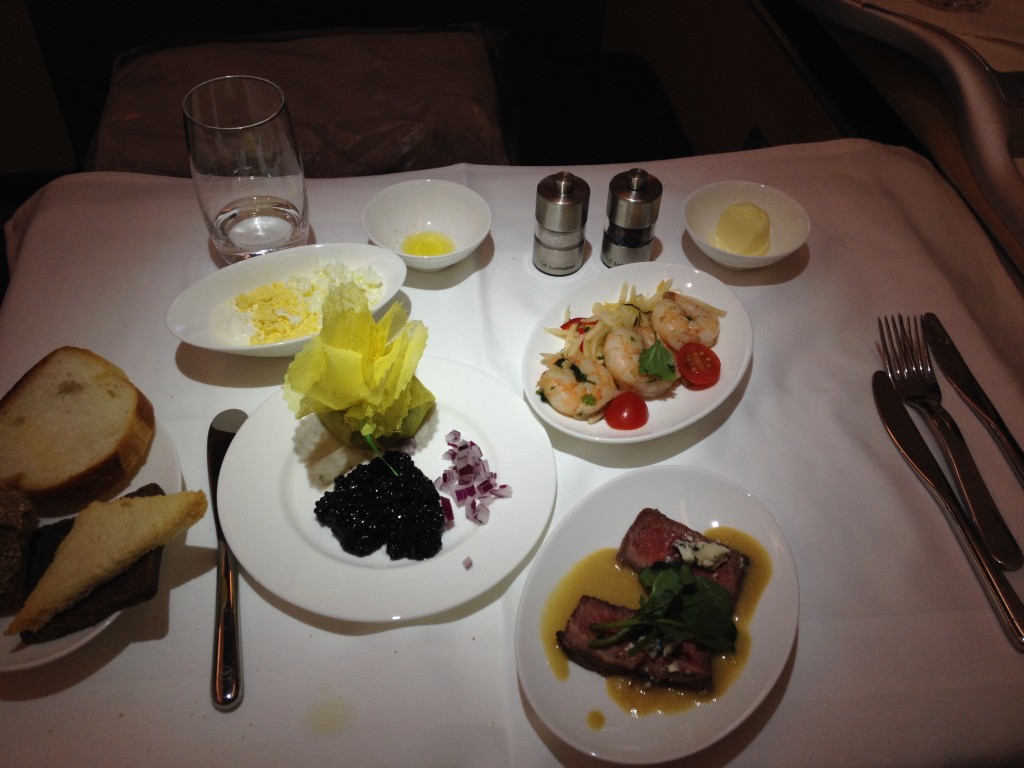 For my main course I had the Masala Lamb with Curried Cauliflower and Fingerling Potatoes which was perfectly seasoned and cooked. 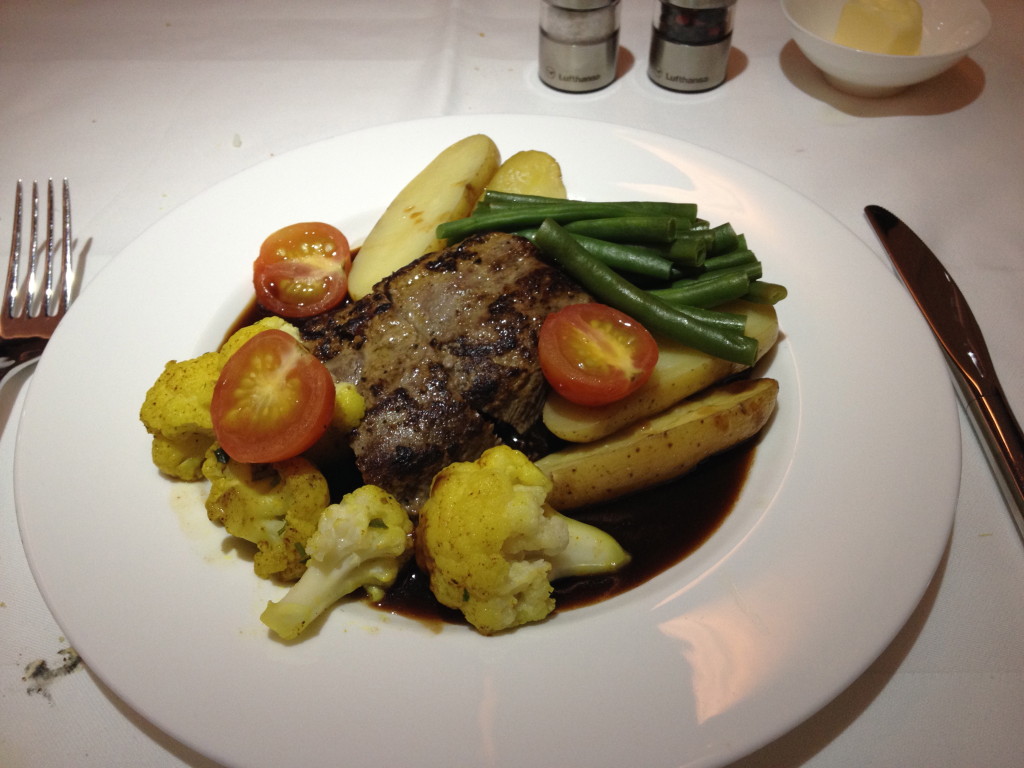 They had a comprehensive wine list and I tried a few glasses including the Spanish LAN a Mano Red as well as some champagne. 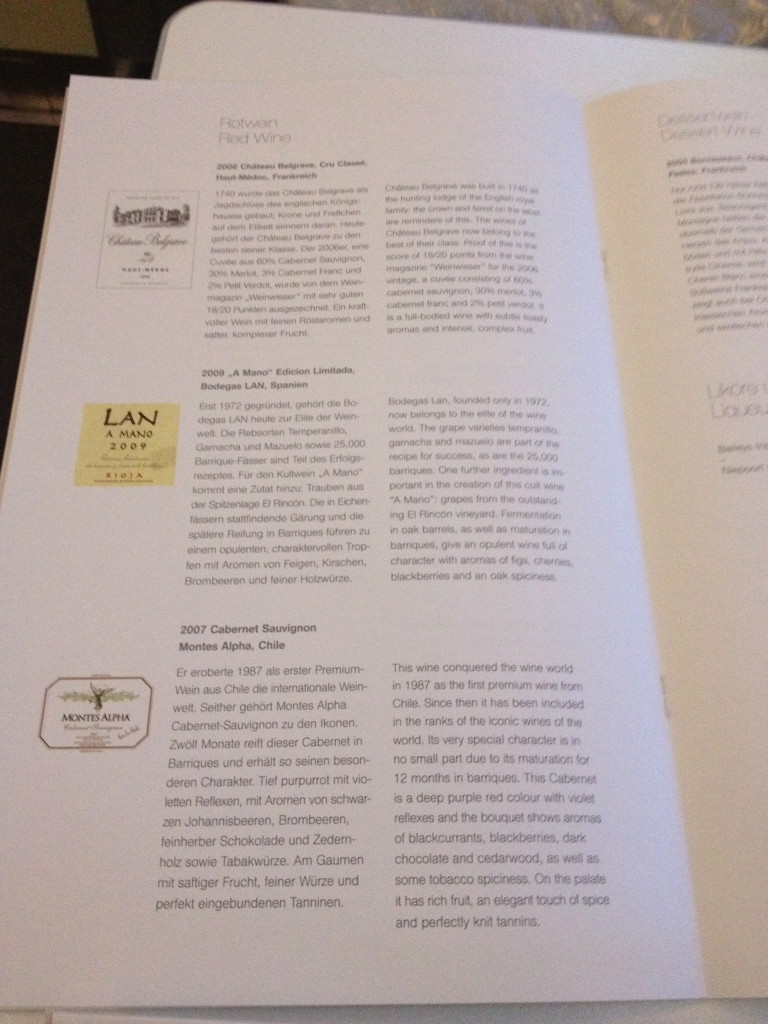 I finished off with some ice cream, fresh berries, and some coffee with Bailey’s to help me sleep on the way to Munich. 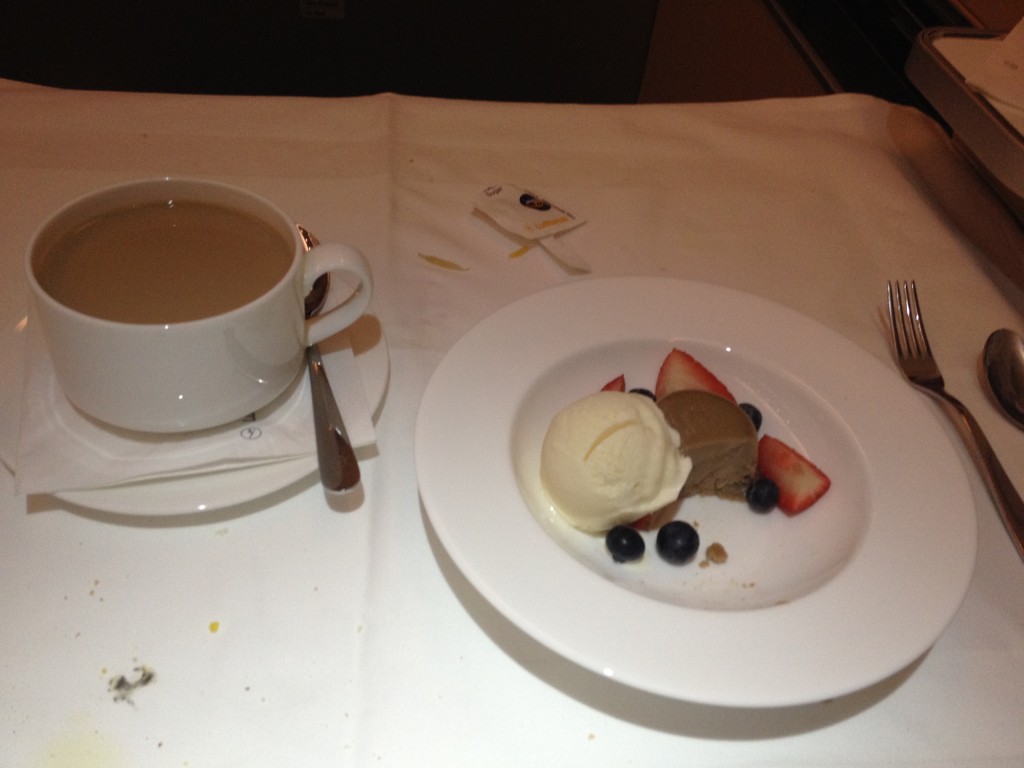 They had given me a pair of pajamas and sleeping in jeans isn’t exactly the best way to arrive rested so I changed into the Oh So Stylish PJs. When in Rome…. 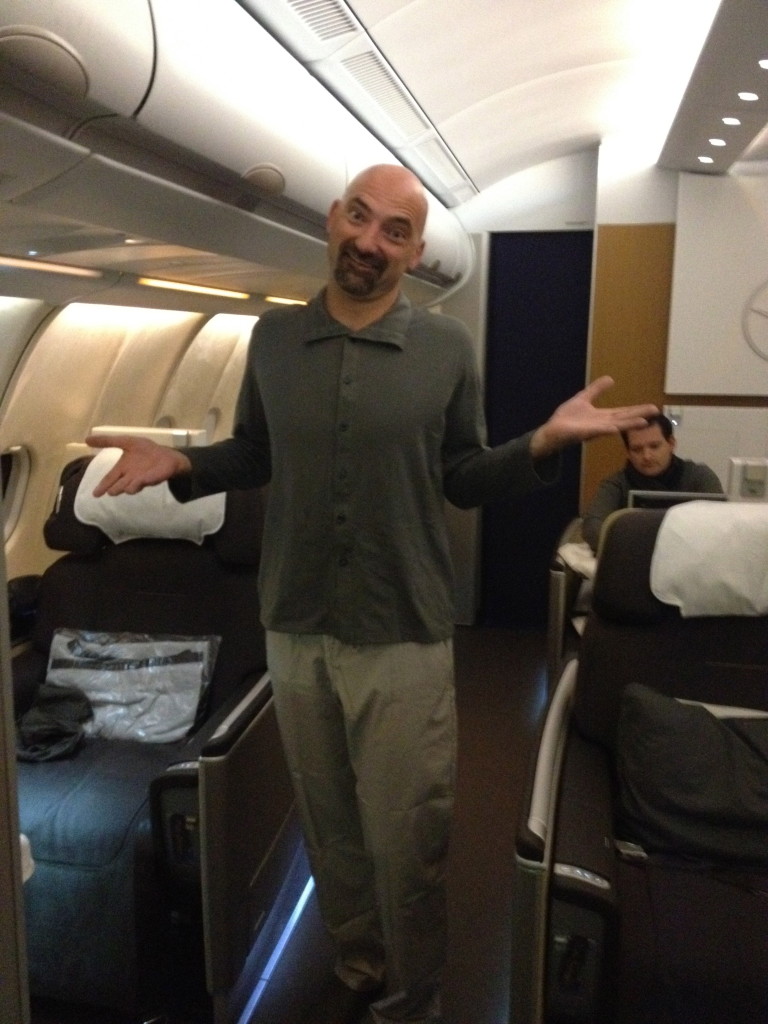 While I was changing, the steward converted my seat into the completely lie flat bed. This is really the way to fly! 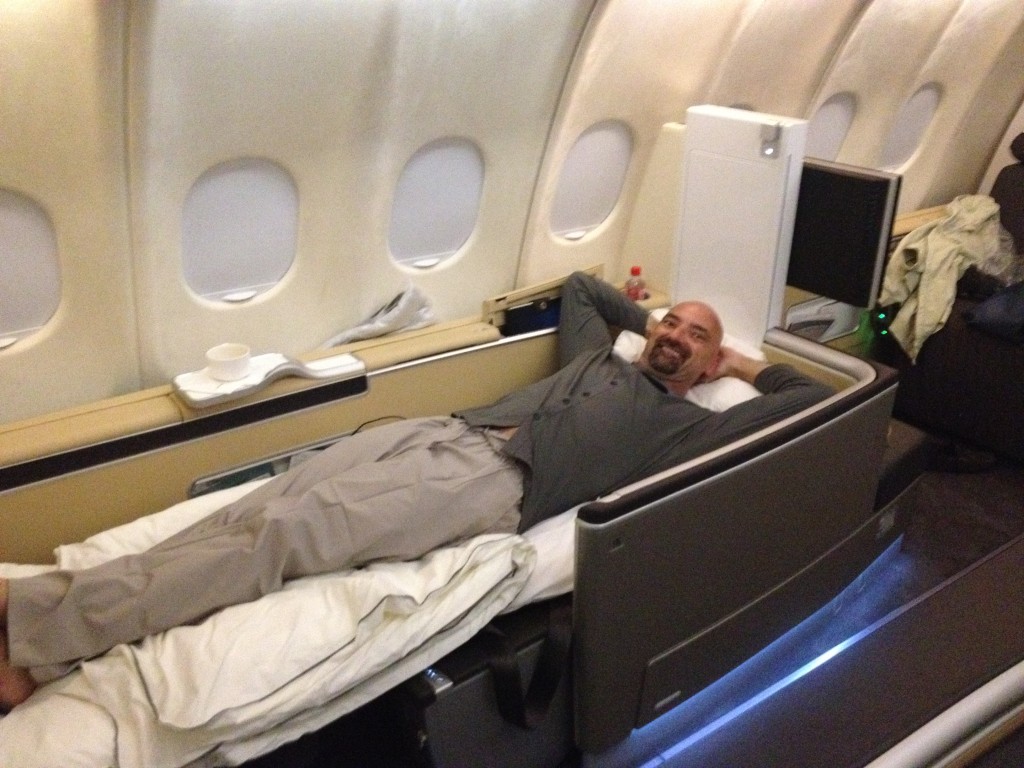 I was able to get a good 5 hours of sleep on the way to Munich but I did have them wake me up for my omelette for breakfast since I wanted to experience everything first class had to offer. 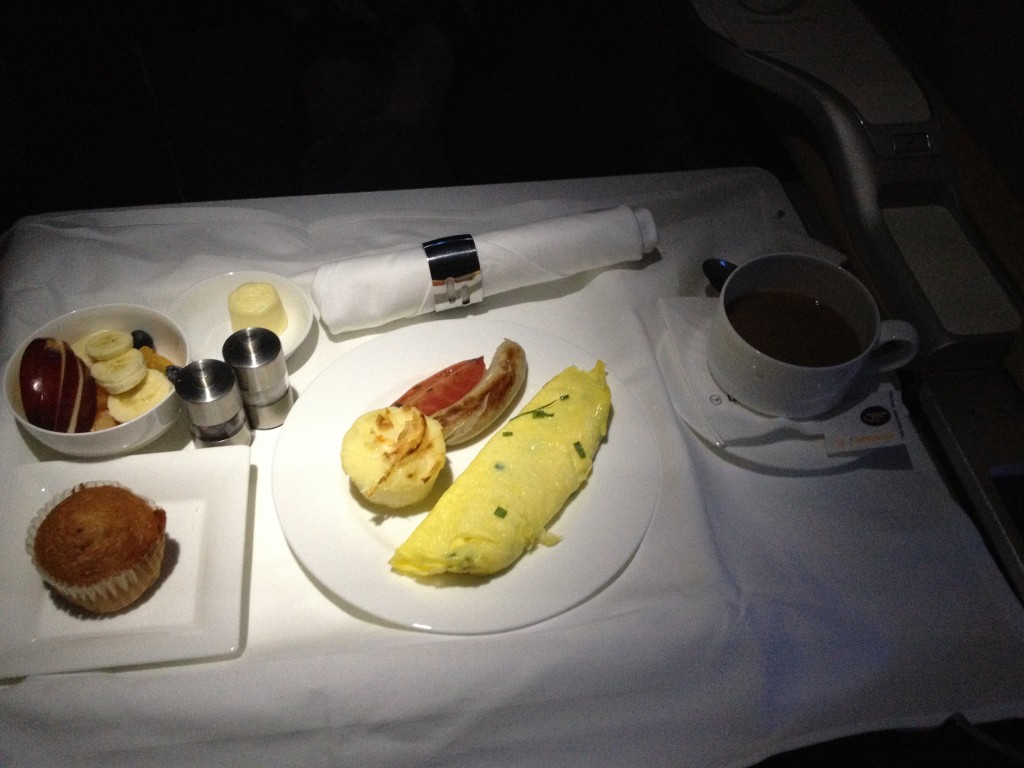 As I opened my window shades (I had 4) I saw the rolling countryside of Germany enveloped in fog. 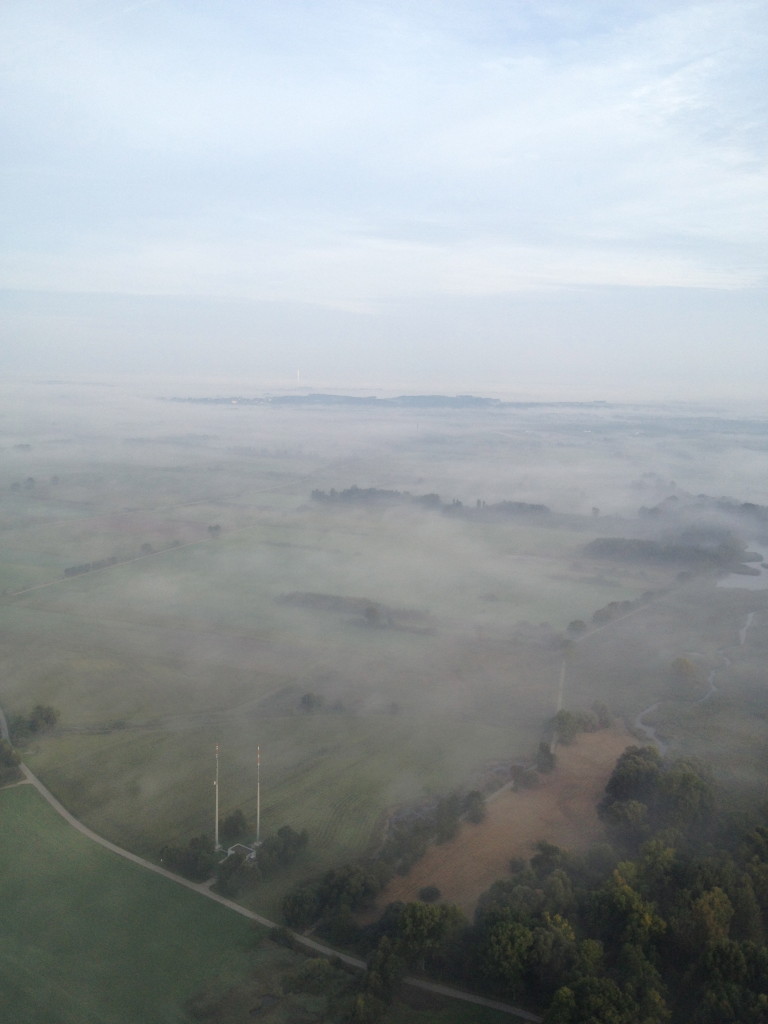 I only had an hour and twenty minute layover in Munich before my nonstop flight to Ibiza which I thought might be a tight connection.  I didn’t realize that one of the best parts of my first class experience was yet to come! Read about that in my next article 🙂