This post is the second in a series about my trip to Inti Fest 2013 in Peru.

After almost missing my flight as usual in a dramatic fashion, I made it on my nonstorp LAN Peru flight from Miami to Lima. Mental note: always get there at least an hour before takeoff because many carriers “close” the flight an hour before even if you aren’t checking bags. The 767-300 plane had an upgraded business class section with completely lie flat seats which made the overnight flight much more pleasant. 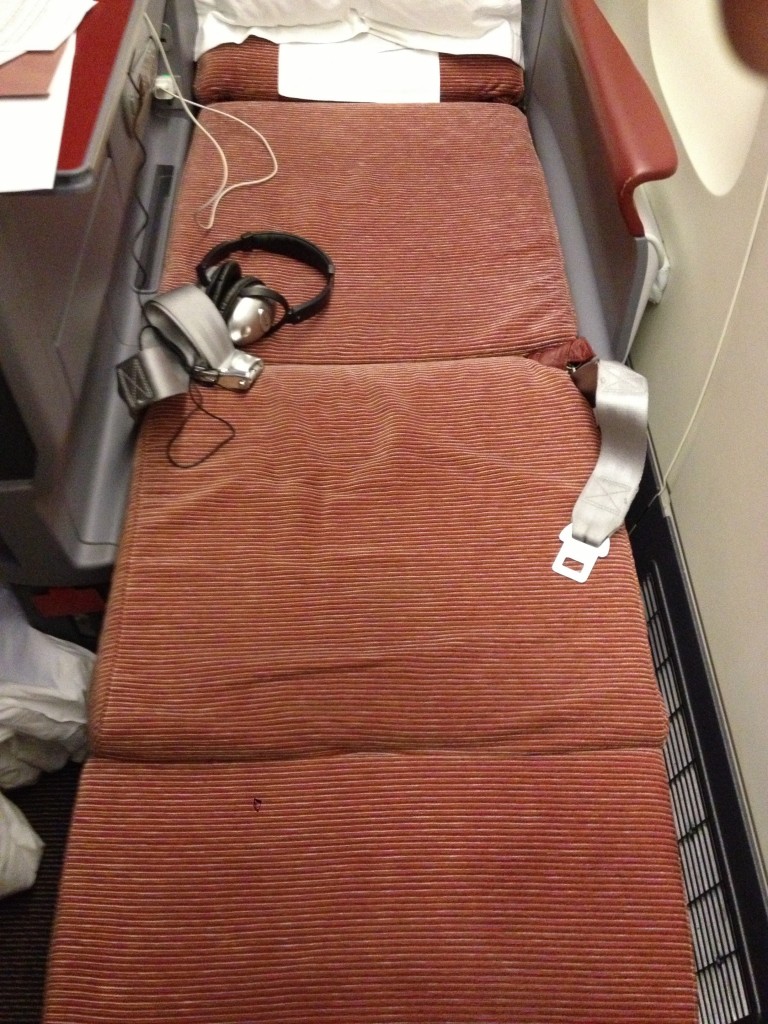 I have found that it is much harder for me to get good rest with the “angled flat” than the completely flat that are 180 degrees. There was the usual assortment of video on demand and music that is pretty much standard these days. and a nice big screen to view it on. It even had a port to plug in your iphone and view pics, videos or music from there! I didn’t really take advantage of this though since it was an overnight flight and I wanted to sleep.  I took the Express Dinner option which gave me more time for sleep by skipping the 2nd course of the meal and bringing everything else out at one time.

Upon arrival in Lima, I found a taxi who offered to charge me 50 Peruvian Soles (~19 USD) to take me to the Sheraton in Central Lima. This in retrospect was definitely overpaying and 30 Soles would have been a fair price. Taxi drivers in Peru have no meters and instead everything is negotiated before you get in their car. The Sheraton Lima is definitely not in the best area since central Lima is far from the tourist area of Miraflores, but since I had been to Lima before I didn’t mind staying a little further away. One of the primary reasons was the great Points and Cash rate of $30 + 1600 Starpoints that was available. This would also be the first time I stayed at a Starwood property since I got Platinum Status last year by Mattress Running and I was anxious to see what kind of treatment I would get.

Since my flight got in at almost 6 AM, I was at the hotel by 7:30 AM and was hoping to push the limits of the platinum early check in benefit. I wasn’t disappointed and they checked me right away into a junior suite. The room was a bit dated and looked like it was last renovated circa 1982.  I was too tired to argue and knocked out for a few hours until about 12.  It was during this nap that I found out that the air conditioning was also functioning like it was from 1982.  I’m the type that has to be cold to sleep well, so this wouldn’t do at all.  Since it was now also noon, I was hoping another room would be available.

This brings up another point that I am finding to be more and more true.  When you have status, don’t be afraid to expect a high standard and ask for things.  The hotels put these programs in place to reward frequent visitors and it is OK to be a little picky about things because you really do have a choice in where you choose to stay. I explained to the nice woman at the front desk (who spoke great English by the way) that the A/C wasn’t working well and asked if I could have a different room.  She did a big of talking to what I assumed was the manager and came back with a smile and said she had found a very nice room for me due to the trouble.  As I took my luggage upstairs, I was greeted with the 18th floor Ollantay Suite, named after one of the first writings that explained the origins of the Inca people.

As I stepped into the room, I realized why the woman was smiling.  This was a pimping suite!

She also explained that since I had platinum status I would get the free buffet breakfast in the dining room for me and a guest (which was super amazing by the way) or I could eat in the club lounge on the 17th floor if I wanted more privacy for my breakfast.  They also had afternoon hors d’oeuvres in the lounge which worked perfect as an afternoon snack.

The room was a pretty incredible value for $30 a night!  This trip was off to a great start!